BAND OF BROTHERS ( MINISERIES ON HBO ) 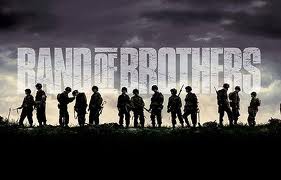 Based on the book Band of Brothers by Stephen Amrbose, the miniseries follows the men of Easy Company, 2nd Battalion, 506th Parachute Infantry Regiment, 101st Airborne Division. It received positive reviews of 8.8 and 9.6 and won a Golden Globe award for being the best mini series of 2002.

Band of Brothers takes place from 1942-1945, following from the Airborne Infantry's training at camp Toccoa, Georgia, USA, to various places in Europe, notably Normandy (France), Holland, Belgium and Germany. It is set during the European theater of World War II.

Synopsis of Band of Brothers []

Easy Company is introduced during its training at Camp Toccoa, Georgia, under Herbert Sobel, a very strict disciplinarian who seems to train his company harder and longer than the commanders of other companies. Sobel also goes out of his way to find fault with the men and the platoon leaders. The company is shipped to England to prepare for D-Day. As training progresses, Sobel's inadequacies as a leader in the field become more apparent and cause most of the noncommissioned officers in the company to attempt to resign en masse. He also causes a dispute with his executive officer, Richard Winters, that escalates higher than Sobel expected. These events lead to Sobel being reassigned to command a jump school for essential noncombat personnel.

Easy Company lands in Normandy, but is scattered all across the region and away from their designated drop zone. The company commander of Easy is killed when his plane suffers a direct hit and First Lieutenant Winters must take command. With a small group of men, Winters takes out a set of German gun emplacements at Brecourt and thereby wins the respect of his fellow soldiers as a leader.

Easy Company fights in the Battle of Carentan, in which they lose several men. Rumors start to circulate that Lieutenant Speirs killed a group of German prisoners of war. Private Albert Blithe struggles with shellshock following the battle. After he is finally spurred into action by Winters during the Battle of Bloody Gulch, Blithe overcomes his fears. Several days later, he is shot by a German sniper after volunteering to be lead scout in a patrol.

Replacements join Easy Company, struggling to be accepted by the veterans who fought at Normandy. The company parachutes into the Netherlands as part of Operation Market Garden, where they liberate Eindhoven. During combat in Nuenen, the replacements integrate themselves with the company, but all are forced to retreat. Sergeant Denver "Bull" Randleman, the replacements' immediate superior, evades German soldiers in Nuenen after being cut off from his unit and is forced to wait there until the enemy leaves in the morning.

Winters writes a report on the challenge of an unexpected resistance to a German attack, and is haunted by his conscience after shooting a teenage German SS soldier. Following Operation Pegasus, Easy Company is called to Bastogne at the start of the Battle of the Bulge. Captain Winters now effectively commands the whole battalion.

Easy Company experiences the Battle of the Bulge and have to hold ground near Bastogne, while running low on ammunition and other supplies. Medic Eugene "Doc" Roe helps out his fellow soldiers where he can, while also scrounging for medical supplies, of which the company is dangerously low. He also befriends a Belgian nurse in Bastogne, who is later killed during a German bombing raid.

Easy Company battles near Foy, Belgium, losing numerous men. The actions of First Lieutenant Norman Dike, the company's commander, come into question. He is eventually relieved by First Lieutenant Ronald Speirs, who becomes the company's new leader. First Sergeant Carwood Lipton attempts to keep the morale of the men up as they endure their trials in the forest near Foy, earning him a battlefield promotion to second lieutenant for his leadership ability.

Easy Company carries out a dangerous mission in Haguenau as David Webster returns from a hospital. Together with new replacement Second Lieutenant Jones, he eventually integrates with the other soldiers, whose experiences at Bastogne have made them weary and closed off from Webster due to the fact he didn't try to leave the hospital early, unlike other soldiers in the company. Captain Winters is promoted to major, Lipton receives his battlefield commission to second lieutenant, and Jones is promoted to first lieutenant.

As Lewis Nixon scrounges for his favored whisky, Vat 69, Easy Company enters Germany. Some of the men on patrol stumble across a concentration camp near Landsberg and free the prisoners after realizing that the guards had abandoned the camp. The sight of the victims leaves many shocked and disgusted.

The company captures the Eagle's Nest in Berchtesgaden, and also discover Hermann Goring's house. The battalion heads out to Austria where the end of the war in Europe is announced. While those with enough points go home, the remainder of Easy Company stays behind until the end of the Pacific War is declared.

There is a variety﻿ of characters in the miniseries. The story focuses on Richard D. Winters, who is the main character of the series. However, each episode focuses on a different character despite this. These are:

Lewis Nixon - an alcoholic who is friends with Winters

Herbert Sobel - the over strict former CO of Easy Company

William "Wild Bill" Guarnere, a paratrooper with a grudge against the Germans

Joseph Toye - an unlucky trooper who gets wounded frequently

Buck Compton - an officer popular in the Company

Eugene Roe - the Company medic, and many others.

Band of Brothers has 10 one hour-long episodes in the series. Even though Winters is main character, there is a main focus for each episode.﻿

The characters that are portrayed are actually the real members of Easy Company. Prelude to each episode contain prerecorded interviews and some of them can be seen in those videos.

Community content is available under CC-BY-SA unless otherwise noted.
Advertisement